For a better visiting experience, it is recommended that you use a higher version of IE (IE11 or above), Chrome or Firefox browser.
Beijing Scenery
Oct 20, 2016

The venerated Chinese history has strewn the land of Beijing with sites of cultural and historical interest. Some of them, such as the Great Wall, former Imperial Palace, Temple of Heaven, Summer Palace, and the ruins of Peking Man at Zhoukoudian, are UNESCO-endorsed world cultural heritage sites. Imperial palaces, mansions, gardens and tombs are epitomes of classical Chinese architecture. Among the massive number of ancient buildings that have remained to this day are quite a few Buddhist monasteries, Taoist temples and Catholic churches, such as Yonghegong Lamasery and Big Bell Temple. There are 120 museums, including Museum of Chinese History and China Art Gallery. Over 100 gardens are open to the public.

An optional local tour program will be provided to accompanying persons to visit the best sites in Beijing. Details will be released later on. 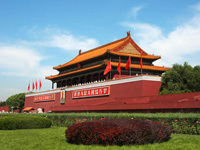 Large enough to hold 1 million people, the 440,000-square-metre Tian'anmen Square in the center of Beijing is the world's largest city square, where sunrises and sunsets are observed solemnly with national flag hoisting and lowering ceremonies. Tian'an men Gate on the northern edge of the square sued to be the front gate of the Ming and Qing Imperial Palace. The rostrum atop the gate, where national leaders review mass rallies or gala celebrations on important occasions, is open to tourists. The Monument to the People's Heroes stands in the center of the square. Behind Zhengyang Gate to the south sprawls Mao Zedong Memorial Hall; to the east is the complex which houses the Museum of Chinese Revolution and the Museum of Chinese History. The Great hall of the People stands on the western side. The night scene of Tian'anmen Square is definitely a MUST for any visitor to Beijing. 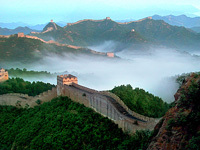 As an emblem of Chinese civilization, a cultural phenomenon of world caliber, and another UNESCO-endorsed world cultural heritage site, the 6350 km Great Wall was in China's feudal years a mammoth defense bulwark that serpentines its way across mountains and valleys in the northern part of the country. The Great Wall came under construction in the 7th century BC. But it was Qinshihuang, the founding emperor of the Qin, who brought it to completion. Repeated extensions were done in later dynasties until the Ming. The 600-year-old Badaling Fortification in Yanqing county in northwest Beijing is representative of Ming sections of the Great Wall. The Great Wall looks equally breathtaking at such sections as Jinshanling, Mutianyu and Simatai.

National Stadium, also known as the Bird's Nest, was a sports facility for 2008 Summer Olympics and Paralympics. The design of this large stadium was accomplished together by Swiss architects Jacques Herzog and Pierre de Meuron and Chinese architect Li Xinggang and the others. The design implemented steel beams in order to hide supports for the retractable roof, giving the stadium the appearance of a bird's nest. Strict rule-based methods were employed in the stadium’s construction, and each half of the 44,000 ton-steel shell is basically identical in design. Spectators benefit from natural air circulation inside, while a translucent membrane provides protection from the rain. Come evening time, the Bird’s Nest puts on its swankiest appearance: A glimpse of the stadium’s reflection off the surrounding moat will have you reaching for your camera. 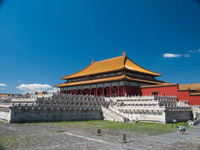 The 720,000-square-metre Palace Museum, better known as "Forbidden City", was the imperial palace for the Ming and Qing. Built during the 1406-1420 period, it is the largest royal palatial complex in existence in China; ranging from the majestic to the exquisite, they bear witness to a nation in transition. Other tourist attractions on the premises include a huge stone ramp carved with intricate dragon and cloud patterns, Imperial Garden and Nine-Dragon Screen Wall. An immense trove of cultural artifacts and treasures of various dynasties, some of them on display in the Treasure Hall and the ceramics, painting, bronze ware galleries, are reason enough for UNESCO to adopt the Former Imperial Palace as a world cultural heritage site. 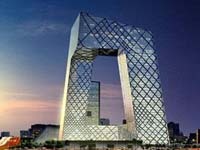 The CCTV Headquarters Building is a 234 m, 44-storey skyscraper Office designed by Metropolitan Architecture, Rotterdam, the Netherlands. The main building is not a traditional tower, but a loop of six horizontal and vertical sections. The construction of the building is considered to be a structural challenge, especially because it is in a seismic zone.

CCTV Headquarters Building was a winner of the ArchDaily Building of the Year Awards in 2012, and was deemed “Best Tall Building Worldwide” by the Council on Tall Buildings and Urban Habitat in 2013. 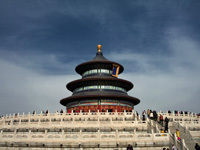 China's largest temple and altar are found in Temple of Heaven, part of a 273 hectare park in Chongwen District today. Built in 1420, it was where Ming and Qing monarchs worshiped the god of heaven and prayed for good harvests. Major structures are hall of Prayer for good Harvest, Imperial Vault of Heaven, Circular Altar, and Abstinence Palace. The temple is divided by two enclosed walls into inner altar and outer altar. To better symbolize heaven and earth, the northern part of the temple is circular while the southern part is square, which reflect the ancient Chinese belief that Heaven is round and Earth is square. The Temple of Heaven is a cultural museum of offering sacrifices to Heaven, which merges architecture, aesthetics, acoustics, astronomy, calendar, music and dancing into an integral whole. UNESCO endorsed Temple of Heaven as a world cultural heritage site in December 1998. 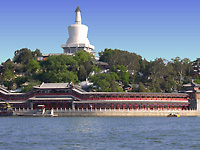 Beihai Park, situated to the northwest of Former Imperial Palace, is the oldest and most unique imperial garden in China, dating back to more than 800 years ago. Buildings are clustered around the famed White Pagoda on Qionghua (Jasper Flower) Island on the lake in the park's bosom, which is densely distributed with halls, rockeries and pavilions. The island provides a vantage point for observing the landscape of Beijing. Major attractions are the Circular City, Painted Boat Studio, Studio of the Tranquil Heart, Nine-Dragon Screen Wall and Five-Dragon Pavilions. The Nine-Dragon Screen, which was built in 1756, is the most delicate of China's three surviving nine-dragon walls. The wall, about 27 meters (89 feet) long, is inlaid with colored glaze and has nine vivid dragons that play with pearls on either side. 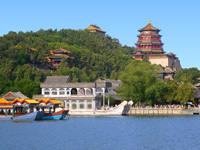 The Summer Palace (Yiheyuan) in the northwestern suburb of Beijing was built in 1750. By far the best-preserved imperial garden in China, it was endorsed by the UNESCO in 1998 as a world cultural heritage site. As a paragon of Chinese gardens, this huge garden includes Longevity Hill, whose beauty is set off by a multitude of halls, kiosks and trees, and Kunming Lake, a huge body of liquid silver. Major tourist attractions are Tower of Buddhist Incense, 17-Span Bridge, Long Corridor, Cloud Dispelling Hall, Marble Boat, Beamless Hall, Garden of Harmonious Delights, the theatre in the Garden of Moral Harmony, and Suzhou Street. The entire place is a de facto museum of China's classical architecture. Housed in these buildings are an immense collection of treasures and cultural artifacts. 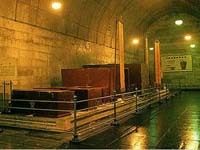 The Ming Tombs are scattered over an area 40km in circumference in Changping County. Thirteen Ming emperors who ruled China after they moved the capital from Nanjing to Beijing were buried there. The largest is the Changling, built in 1413 for the remains for Zhu Di or Emperor Chengzu. Burial objects are on display from the underground palace of the Dingling, the tomb of the last Ming emperor, Zhu Yijun, and his two empresses. The Holy Way leading to the Ming Tombs is flanked on both sides by 30-odd men and horses and other animals carved in graphic images out of massive boulders. In terms of size, this group of stone sculptures is rare anywhere in China. 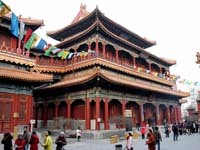 Yonghegong (Palace of Harmony and Peace) in Eastern District had been the mansion of Emperor Yongzheng during his days as the crown prince. After he ascended the throne he had it converted into a lamasery, which has remained as such to this day. Influences of Han, Manchurian, Mongolian and Tibetan architecture are palpable in this complex that consists of three finely crafted archways and five imposing halls laid out tastefully over an area of 66,400 square meters. Among the treasures in these halls is a 26-metre-tall statue of Maitreya (the Smiling Buddha), which is carved out of a single sandalwood trunk. 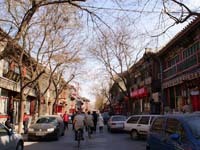 If you wish to take home a souvenir of ancient China, like curios, calligraphy, painting or other artwork, you'll definitely want to come the most famous antique street in Beijing - the Liulichang street. That's the place to be in Beijing for "antique chic". The site was originally a colored glaze factory. Later, businessmen and venders began to sell curios and old books there. Over years the factory was gradually replaced by the bazaar of calligraphy, painting, copybook, artifacts and the four treasures of the study. i.e. writing brush, ink stick, ink slab and paper. Later it fell into absence of lively atmosphere for a time. It was renovated in 1982. The whole street is zigzag, simple and elegant, artistically recreating the charm of previous cultural street. Many of the antiques here are over a hundred years old. Some are claimed to be more than a thousand years old.